Origins of the Company

Konami Gaming is considered to be the fourth-largest video game maker in Japan. After the poor performance of the video game industry, Konami studio diversified and began producing slot machines. Since 1978, the company began to establish close relationships with several game developers in the US to provide the best service to gamblers.

Currently, Konami Gaming is one of the most well-known companies not only for gambling equipment but also for gaming equipment including electronic cabinets, electronic games, and trading cards.

Over the years, Konami studio has produced great online slots. The company's headquarters were relocated to Las Vegas in 2005, where the company makes slot machines. Previously, Konami Gaming was based in Tokyo, USA, and Sydney. 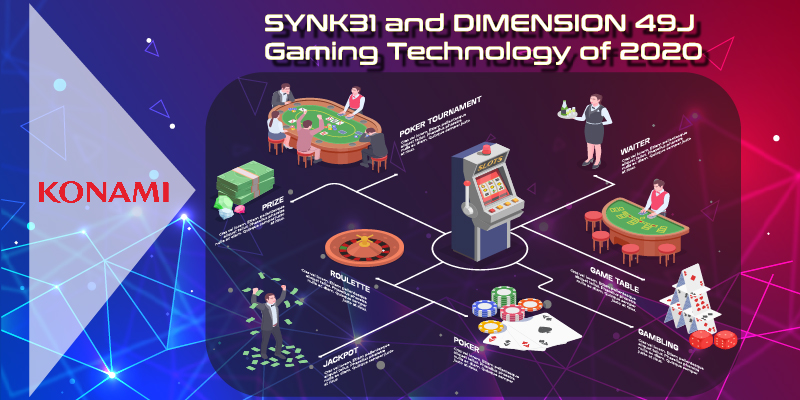 Konami rewards represent the company’s investment in systems research and development (R&D), aimed at supporting the casino industry with high-performance entertainment and technology.

Konami's DIMENSION 49J and SYNK31 system were selected by an independent panel of experts as the most innovative products of the year.

Tom Jingoli - executive vice president and chief executive officer at Konami Gaming said that the company's goal is to be committed to championing the future of the Konami video games through innovative products like DIMENSION 49J and SYNK31 to promote operator distinct value, through streamlined design, efficient results, and lasting quality.

The DIMENSION 49J maximizes the comfort and entertainment of gamblers while maintaining optimal size and adaptability for different operators. J-curves and 49-inch slot cabinets are top launchers for game content, developed to maximize excitement for bettors.

The All Aboard is also part of the cabinet's first series of games, now expanding across North America following its proven success in Australian markets.

Jingoli has stated that the DIMENSION 49J is serving a robust combination of slot machines on a machine that maintains long-lasting performance and is highly versatile. He argued that as casino floors continue to change, streamlined, and efficient gambling cabinets like the DIMENSION 49J will help open doors for continued advancement, through thoughtful design and quality.

All essential AML information is collected and aggregated with near real-time results, allowing operators to identify and respond to problems as they occur.

Konami code is one of the coolest features of this company. Gradius slot was the first game to have such code as the Nintendo slot was making waves in the market. The classic Contra slot game also has cheat codes. Gamblers engage in cheat-coded games merely by pressing a specific set of buttons on the console after pausing the game.

As a result, bettors can get help in clearing difficult levels or simply enhancing the gaming experience. Konami code quickly gained popularity and was used in other games.

With today's reputation, Konami Gaming begins to license some of the best games that are likely to be transformed into Hollywood movies in the future.

Published: 18 January 2021 14:54
Previous article
DraftKings protected the betting streaming rights of Bundesliga in the USA
Next article
What Are the Best Popular Slots That Gamblers Should Try to Win On?

Pragmatic Play, a leading web content supplier to the gaming sector, has actually included another hit to its luxurious array with Pirate Gold Deluxe.

Hammer of Vulcan slot is one of the latest Quickspin slots that spinners can play for free without ads, registration and win a huge award of up to €33,800.

What Is 5-Card Charlie? Defination & Strategies

What Is Progressive Blackjack and How Does It Work?

Check out the article to learn about progressive blackjack, how it works, payouts, and whether it's worth it to play.

Greentube is challenging players to uncover secrets of the deep in its latest release Lord of the Ocean™ 10: Win Ways™.

Winning Casino Taxes - Things That You Need to Know?

Learn more on winning casino taxes, how the tax varies for specific casino games and the value of the win, and what happens if you don't report it and pay taxes on time.