List of online casinos that accept Bitcoin deposits. ✅ Expert reviews from CasinoMentor. ✅ Find the best Bitcoin casinos for you. 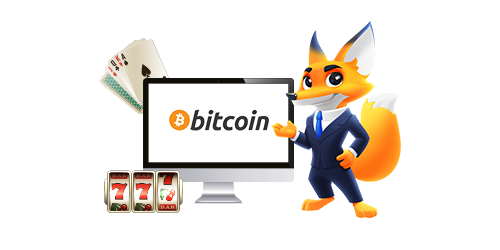 All
473
Recommended
18
Newly opened
26
Big brands
21
What is in All casinos tab?
Additional filters
Payment Method: Bitcoin
Clear all filters
Filter
Showing casinos: All online casinos in our database
1

Bitcoin is a new currency that does not rely on banks and has no actual monetary equivalent. It is decentralized virtual money or cryptocurrency that is utilized by millions of individuals and companies worldwide. Thanks to it unique features, transactions through cryptocurrencies will have faster processing times and cheaper fees than other online payment options.

When you gamble with Bitcoin, you secure your identity and may deposit and withdraw payments anonymously. There is no exchange of banking or personal information in order to conduct financial transactions. There are already hundreds of Bitcoin online casinos, each with its own set of betting games for cryptocurrency users.

Today's article will introduce you to the history of Bitcoin, what other cryptocurrencies are often accepted at online casinos, the benefits and disadvantages of using this currency when gambling online, and how to choose a safe casino that offers payment through this currency. So, let's find out right now.

What Is Bitcoin? How It Works

Bitcoin initially surfaced in the public eye in 2009, and it is unclear who invented it. We only know that Satoshi Nakamoto is an anonymous individual or an anonymous organization.

Satoshi Nakamoto studied and produced the initial Bitcoin sources in 2008. Not shortly after that, the domain name Bitcoin.org was initially offered to the world, serving as the cryptocurrency's unofficial "birth certificate." It was a personal blog post by the originator titled "Bitcoin: A Peer-to-Peer Electronic Cash System."

Satoshi Nakamoto describes strategies for leveraging peer-to-peer technology to establish "a trustless electronic transaction system" in this article. Not long after that, Satoshi Nakamoto launched the Bitcoin network in January 2009, based on the introduction of the Bitcoin genesis block.

Hal Finney, a programmer, was one of the first to advocate for Bitcoin trading. Finney downloaded the bitcoin program on the day it was launched and got 10 Bitcoins from Nakamoto, marking the beginning of Bitcoin - the world's first cryptocurrency.

In the years that followed, cryptocurrencies akin to Bitcoin arose one after the other. These are the more sophisticated cryptocurrencies, Ethereum and Litecoin, which benefit from Bitcoin's blockchain.

Bitcoin was originally listed on the stock market in 2010. It's worth skyrocketing following this occurrence. During the first several y