What is Yahtzee? All You Need to Know About This Games

Yahtzee is one of the most popular games in the world. You only need five dice, a pencil, and some scorecards to play this family game night favorite, as you strive to fill your scorecard and build up the highest possible score. This fun dice game has a long history with a very simple goal: You just roll precise dice combinations that are detailed on a Yahtzee scorecard. The more difficult the combination, the greater the score. In the end, the player with the highest score is determined as the winner.

In this post, we'll go over how to play Yahtzee both offline and online, as well as give a few tips and strategies for when you're next pitting yourself against friends and family in a game of this timeless classic.

What is Yahtzee? All You Need to Know About This Games 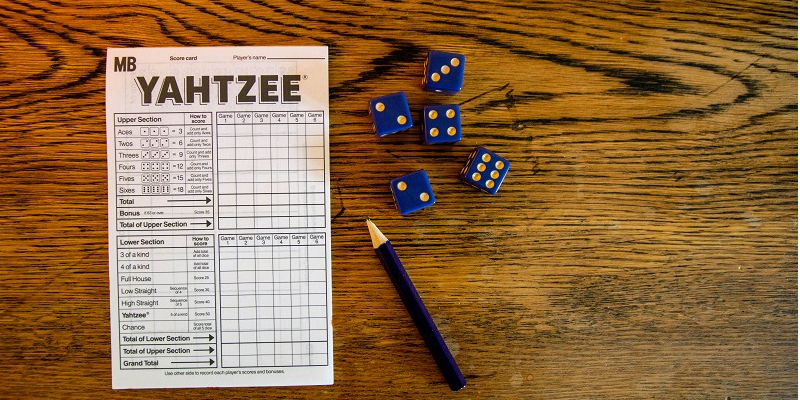 Milton Bradley created the dice game Yahtzee (a company that has since been acquired and assimilated by Hasbro). Edwin S. Lowe, a gaming entrepreneur, initially sold it as Yahtzee in 1956. The game evolved from older dice games including Poker Dice, Yacht, and Generala. It is similarly comparable to the Scandinavian drink Yatzy.

The goal of the game is to score points by rolling five dice and making specific combinations. The dice can be rolled up to three times every round to try to make different score combinations, and the dice must stay in the box. A game is made up of thirteen rounds. Following each round, the player selects which scoring category described on the scoreboard will be utilized for that round. A category that has been used in the game cannot be used again. The point values in the scoring categories vary, with some being set numbers and others related to poker themes, based on the value of the dice. A Yahtzee happens when the player has five dice of the same value, which results in 50 points, the greatest point total in any category. The player who scores the most points wins.

From 1956 through 1973, the E.S. Lowe Company sold Yahtzee. The Milton Bradley Company bought the E.S. Lowe Company in 1973 and assumed the rights to manufacture and distribute Yahtzee. Over 40 million Yahtzee games were sold globally during Lowe's control. Hasbro, the current owner, claims that 50 million Yahtzee games are sold each year. Winning Moves Games USA is now marketing a vintage edition of this global game.

The History of the Game

Yahtzee's general principle may be traced back to a variety of classic dice games. Among these are the games Generala, Kniffel, and Poker Dice, as well as the English games Cheerio. The dice game Yacht, which is an English relative of Generala and dates back to at least 1938, is Yahtzee's most important forerunner.

On April 19, 1956, toy and game entrepreneur Edwin S. Lowe registered Yahtzee as a trademark with the United States Patent and Trademark Office. The term Yahtzee was first used commercially a few weeks earlier, on April 3. Lowe's product was classed as a Poker Dice Game. Lowe is also credited for bringing Bingo to the United States.

According to Hasbro, the game was created by an unnamed Canadian couple who named it The Boat Game because they played it with their friends on their yacht. Later, they asked Lowe if he could build some sets to present to their friends who loved the game as gifts. Lowe saw the potential for marketing the game and bought the rights from the couple in return for 1,000 gift sets. Lowe expands on this topic in Marvin Kaye's 1973 novel A Toy is Born.

According to Lowe, the game did not fare well commercially at first because the rules and attraction were difficult to express in advertising. He eventually came up with the concept of hosting Yahtzee parties where people may play the game and develop a firsthand understanding of it. The concept was a hit, and fans soon spread the news about the game by word of mouth.

From 1956 through 1973, the E.S. Lowe Company sold Yahtzee. Several modifications were made to the game's packaging, contents, and presentation during Lowe's ownership.

Lowe obtained the copyright to the game and its materials in 1956, 1961, 1967, and 1972. Later, Milton Bradley purchased the E.S. Lowe Company in 1973 and acquired the rights to manufacture and market Yahtzee. Over 40 million Yahtzee games were sold in America and across the world during Lowe's ownership. The game's popularity has not waned. Each year, 50 million Yahtzee games are sold, according to current owner Hasbro.

The Yahtzee logo has evolved throughout time. The original logo was utilized for the entire time the game was created completely by the Lowe firm. After 1973, the logo changed many times. This emblem appears on the scorecards and the game boxes.

How to Play Yahtzee?

There are a total of 13 rounds to the game. A player is given 5 dice and receives three dice rolls in each round, although they can terminate their turn after one or two rolls. After the initial roll, the player may save any dice and re-roll the remaining dice. Following the second roll, this technique is repeated. The player has total control over which dice are rolled. It is possible to re-roll either dice that were or were not previously rolled.

The Yahtzee scorecard features 13 distinct category boxes, and the player must pick one of these categories after the third roll in each round. The box score is determined by how well the five dice meet the scoring system for the category. The scoring rules for each category are detailed below.

One of the categories, for example, is named Three of a Kind. This category's scoring rule states that a player only scores if at least three of the five dice have the same value. Each player completes the game after 13 rounds, with each of the 13 boxes filled. The final score is computed by adding the scores from all thirteen boxes, plus any bonuses described in the scoreboard.

There are 13 scoring boxes on the Yahtzee scorecard, separated between upper and lower sections.

There are six boxes in the upper section. The total number of dice matching that box is added to calculate the score in each of these boxes.

A 35-point bonus is applied to the upper section score if a player earns 63 or more points in these six areas. Although 63 points correspond to exactly three-of-a-kind for each of the six boxes, a typical approach to obtain the bonus is to score four-of-a-kind for some numbers, requiring less of the other numbers. Even if a player scores a "0" in an upper section box, they can still get the bonus if the condition of 63 points is met throughout the play.

If a category is chosen but the dice do not fit the category's qualifications, the player receives a 0 in that category. Some combinations let the player choose which category to score them in. For example, a full house can be scored in the Full House, Three-Of-A-Kind, or Chance categories. Chance is frequently utilized for a turn that will not score well in any other category.

What is the highest score in Yahtzee?

The maximum possible score is 1,575, which is achieved by tossing 13 Yahtzees, scoring 12 Yahtzee bonuses of 100 points each, and 375 in the other categories.

What Is the Lowest Score in Yahtzee?

There is no exact data on the lowest score ever recorded in this game, given its popularity among the community. 5 is the lowest possible score after 13 rounds, that is when the player gets (1-1-1-1-1) and scores it in Chance, then gets zeros in all the other boxes. That doesn't seem possible, though, as that combination can get that player a Yahtzee and earn 50 points. Unless it's a family game and players intentionally want to lose in order to cede victory to their loved ones.

Is It Possible to Play Online Yahtzee?

Yahtzee is primarily recognized as a face-to-face game enjoyed by families, but it is also feasible to play Yahtzee online. So, even if your buddies are hundreds of miles away, you can still play simply by choosing an online gaming site and beginning a game.

If you don't have anyone to play this fun game with, that's not a problem. It's simple to discover other Yahtzee aficionados to play with online in this globalization era.

The ability to play Yahtzee from behind a desktop or smartphone screen offers advantages and disadvantages, with the major advantage being that you can play whenever and anywhere you choose. Furthermore, you will not have to spend anything to play because there are several places where you may play Yahtzee for free.

However, playing online does not provide the same experience as playing in person because it is not as interactive. More specifically, you won't be able to make short comments about other players' rolls, and you won't be able to see another player's happiness when they roll Yahtzee. Thus, the game is best played offline for that personalized and sociable feel.

Yahtzee is a game that is mostly reliant on chance, but there is also an element of skill to the gaming. Here are five pointers to help you enhance your Yahtzee strategy:

Always aim to obtain the 35-point bonus by scoring 63 or more points in the upper section. This is best accomplished by rolling as many fives and sixes as possible.

You rolled a negative combination and don't want or can't exploit your opportunity? If so, give up the aces box in the upper part, as it only yields six points.

Use your chance box sparingly at first, since you'll need it later in the game when getting combos will be more difficult. Aim for a chance box score of 25 or above.

If you already have Yahtzee, don't pass up the opportunity to roll it again, since each extra Yahtzee is worth 100 points.

Although the above strategies work quite well with this game, always remember that its original purpose is not to find a winner, but to have fun. Don't let those scores affect your relationship with other players. Instead, simply enjoy the exciting emotions that this game brings.

Today's article has summed up everything you need to know about Yahtzee, an engaging and simple dice game that anyone can play. In addition, if you have any questions about other gambling games, our experts can answer your questions through in-depth articles on our website.

Published: 06 July 2022 16:10
Previous article
DraftKings protected the betting streaming rights of Bundesliga in the USA
Next article
Romanian Gamblers are About to Face 40% Tax on Withdrawals

How Do You Play Dice? Basic Tactics to Shoot Dice

Dice, an exciting game of chance, traditionally refers to a gambling game like craps. Learn how to shoot dice and play dice for free and for real money here.

Check out this article to know What a fish table game is and how you may play them online at your leisure.

All Blackjack Terms You Need to Know When Playing the Game

You will find the most common blackjack glossary when getting started to one of the most excitng casino games. Discover and play hundreds of blackjack for free.

NetEnt launches a new baccarat online casino with a chance to play for free. So you can practice your skills and learn how to play before playing for real money.

What Is 5-Card Charlie? Defination & Strategies

What Is Progressive Blackjack and How Does It Work?

Check out the article to learn about progressive blackjack, how it works, payouts, and whether it's worth it to play.

Greentube is challenging players to uncover secrets of the deep in its latest release Lord of the Ocean™ 10: Win Ways™.

Winning Casino Taxes - Things That You Need to Know?

Learn more on winning casino taxes, how the tax varies for specific casino games and the value of the win, and what happens if you don't report it and pay taxes on time.